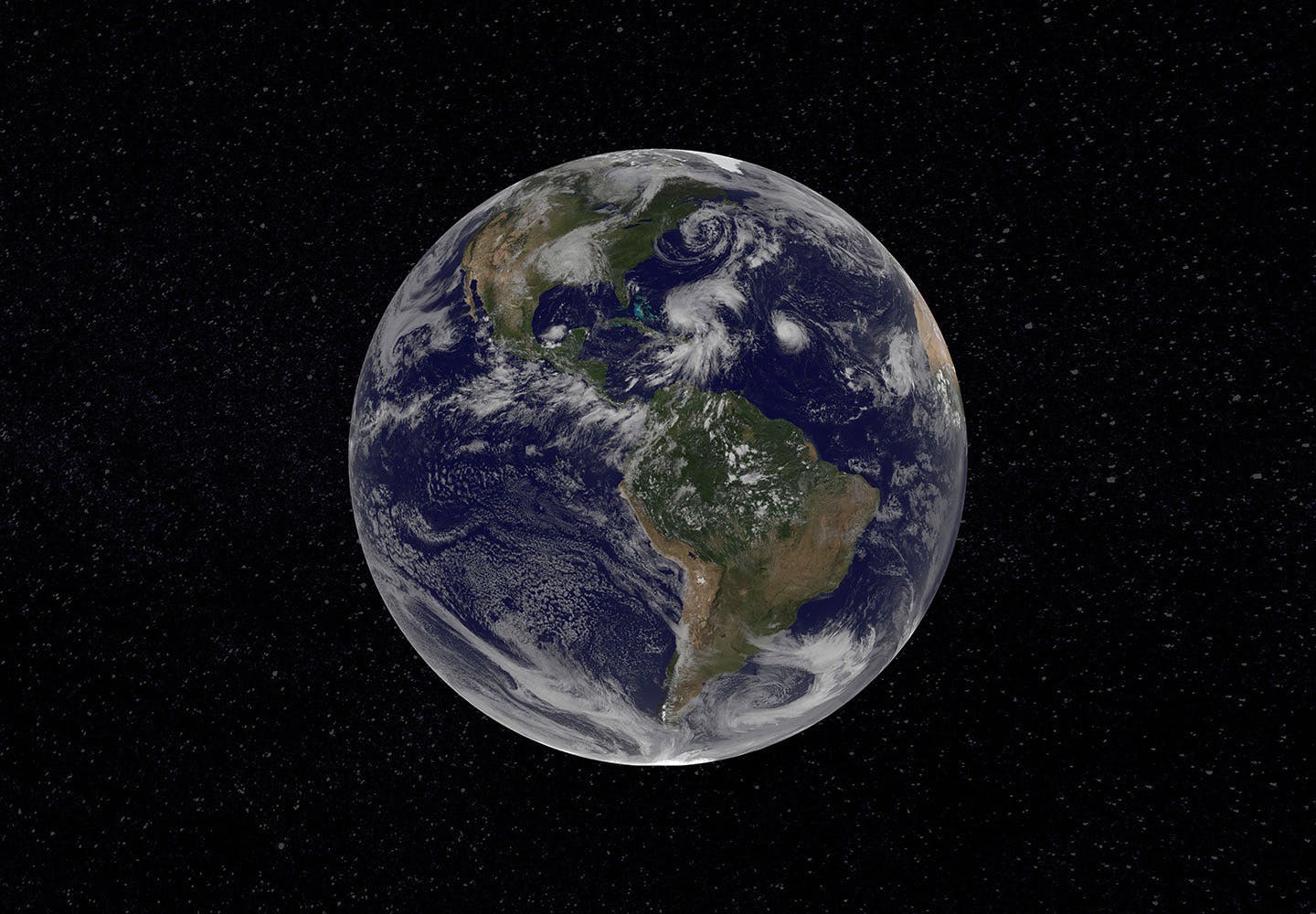 A state-of-the-art climate model, funded by the Leonardo DiCaprio Foundation and released by the prestigious scientific publisher Springer Nature, offers a roadmap for meeting -- and surpassing -- the targets set by the Paris Climate Agreement, showing that we can solve the global climate crisis with currently available technologies and natural climate solutions. The book, entitled Achieving the Paris Climate Agreement, was the culmination of a two-year collaboration with 17 leading scientists at the University of Technology Sydney (UTS), two institutes at the German Aerospace Center (DLR), and the University of Melbourne’s Climate & Energy College.

As the Intergovernmental Panel on Climate Change (IPCC) warned in its Special Report on Global Warming of 1.5°C  (SR1.5) released October 2018, the Earth must be kept below the dangerous threshold of 1.5°C in global average temperature rise above pre-industrial levels if we are to avoid a worsening of climate-related impacts. We are already seeing the devastating consequences of the current 1°C global temperature increase, including rising sea levels in many coastal cities, extreme storms, prolonged droughts, and intensified wildfires.

The impacts resulting from a higher 2°C level are almost unimaginable -- the death of the coral reefs in every ocean, the collapse of nearly one-quarter of the world’s agricultural land, dramatically increased heat waves and wildfires, 100 million people driven to extreme poverty sparking multiple refugee crises, 1 meter of sea level rise in some regions, and more than $11 trillion per year in damages from extreme storms and flooding. Stacked upon each other, these impacts and many more, could undermine the very fabric of life on our planet, greatly challenging the continuation of human civilization as we currently know it.

Up until now, it was assumed to be difficult, if not impossible, to achieve the carbon budget required to stay below 1.5˚C – a maximum of 400 billion tonnes of cumulative carbon dioxide emissions (GtCO2) from January 2018 on. Humans today release approximately 39 GtCO2 per year, mostly from the burning of fossil fuels -- coal, oil, and natural gas. At our current level of emissions, we would only have 7 years to completely cease the use of all fossil fuels, which is clearly not feasible. While many scientists have modeled 1.5°C climate mitigation pathways, to make the math work almost all of them require the use of unproven and potentially dangerous geoengineering strategies like Solar Radiation Management (SRM) or Bio-energy with Carbon Capture & Storage (BECCS).

The One Earth climate model is groundbreaking in that it shows the 1.5°C target can be achieved through a rapid transition to 100% renewables by 2050 (56% by 2030), alongside a major conservation effort to increase the resilience of natural ecosystems and help ensure greater food security. This includes a moratorium on land conversions by 2030 and 400 GtCO2 of ‘negative emissions’ from forest and land restoration (shown in gold below the zero line), which pulls carbon dioxide out of atmosphere and stores it in trees and soil.

Co-author and editor Dr. Sven Teske, Research Director of the Institute for Sustainable Futures at the University of Technology Sydney (UTS) said, “Scientists cannot fully predict the future, but advanced modeling allows us to map the best scenarios for creating a global energy system fit for the 21st century. And with momentum around the Paris Agreement lagging, it’s crucial that decisionmakers around the world can see that we can, in fact, meet global energy demand at a lower cost with clean renewables.”

Some have doubted that a transition to 100% renewables is even possible. To explore the potential, the scientists at UTS created a sophisticated computer model of the world’s electrical grids to date -- with 10 regional and 72 sub-regional energy grids modeled in hourly increments to the year 2050 along with a comprehensive assessment of available renewable resources like wind and solar, minerals required for manufacturing of components, and configurations for meeting projected energy demand and storage most efficiently for all sectors over the next 30 years.

The result of the modeling effort shows that not only is it possible to switch to 100% renewables for all energy uses, but it will cost much less to operate than today’s energy system. Moreover, it will eliminate the toxic pollution associated with the burning of fossil fuels, estimated to be the primary cause of 9 million premature deaths per year. The renewable energy transition will not only improve public health worldwide, it will also drive economic development, providing the 30 million people currently working in the energy sector with permanent, well-paying jobs and creating an additional 12 million new jobs.

The proposed energy transition outlined in the One Earth climate model will require an investment globally of approximately $1.7 trillion per year. This sounds like a lot, but it pales in comparison to the vast subsidies governments currently provide to prop up the ailing fossil fuel industry, estimated at more than $5 trillion per year by the International Monetary Fund (IMF). Taxpayers are unwittingly funding the climate crisis, and that needs to stop. The research tells us that we could be creating the clean energy future we so desperately need for less than one-third of what we’re spending now, and in so doing improve energy access in the developing world.

“With the pace of urgent climate warnings now increasing, it’s clear that our planet cannot wait for meaningful action. This ambitious and necessary pathway shows that a transition to 100% renewable energy and strong measures to protect and restore our natural ecosystems, taken together, can deliver a more stable climate within a single generation.”

There are five major components to the renewable energy transition. First is increased capacity to generate electricity mostly through solar and wind power, enabling the electrification of all energy uses including power, heating, transportation, and even industrial uses. Second is increased storage capacity in the form of battery arrays and pumped hydroelectric (which uses excess generation to pump water up to a reservoir releasing the energy when needed). Third is energy efficiency – decreasing overall energy consumption, especially in the developed world, by making buildings, cities, and vehicles more efficient. Fourth involves repurposing the existing gas pipeline and storage infrastructure to deliver hydrogen produced by renewable sources. And fifth is a gradual retraining of the energy workforce to participate in the burgeoning green economy.

The sixth major component of the climate model is land restoration. “Citing a growing body of research, we show that using land restoration efforts to meet negative emissions requirements, along with a transition to 100% renewable energy by 2050, give the world a good chance of staying below the 1.5°C target,” said Malte Meinshausen, co-author, Founding Director of the Climate and Energy College at the University of Melbourne and Potsdam Institute Fellow.

The One Earth model shows just how important our natural ecosystems are. Justin Winters, Executive Director of the Leonardo DiCaprio Foundation, said, “Nature is the missing key. While the renewable energy transition is imperative to solving the climate crisis, it isn’t enough. Currently wildlands and oceans absorb one-half of all our CO2 emissions. As this climate model shows, in order to keep global temperature rise to no more than 1.5°C, we have to keep our natural carbon sinks intact, scale up restoration efforts and shift to regenerative agriculture. Without them we have no future.”

The land use sector should be a big part of the climate solution. Unfortunately, because of rampant deforestation and unsustainable industrial agriculture and livestock practices, it is a net emitter of greenhouse gas pollution. Many efforts, like the New York Declaration on Forests, is working to halt deforestation by 2030, and UN Sustainable Development Goal 15 calls ending to this destructive practice. The climate model shows that by protecting natural ecosystems and completely phasing out deforestation in the 2030’s, we can maintain the integrity of the carbon sinks that are so vital to rebalancing our global climate system.

The newly released climate model is part of the larger One Earth initiative, launched by the Leonardo DiCaprio Foundation in 2017. The initiative builds upon the latest science to create a vision for the world that is possible in 2050, a world in which humanity and nature can coexist and thrive together. The vision is based upon three pillars of action – 100% renewable energy, the protection and restoration of 50% of the world’s lands and oceans, and a transition to regenerative agriculture. Together, these pillars of action give us a global roadmap to tackle the climate crisis and to ensure a sustainable future for all of Earth’s inhabitants.

The One Earth Reference Case
After 20 years of negotiations, the world’s governments came together under the United Nations Framework Convention on Climate Change (UNFCC) and established the Paris Climate Agreement in 2015 (COP25). They created a structure in which countries could submit pledges, called Nationally Determined Commitments (NDCs), that would be added together to achieve the target of staying “well below 2˚C” in global average temperature rise, with the goal of gradually increasing commitments over time. Despite Trump’s move to increase fossil fuel production in the United States and his stated “pull-out” from the Paris Agreement, current global emissions are actually leveling off. In 2017 emissions were about 39 GtCO2 per year, and emissions could peak by 2020 according to many experts.

While the Paris Climate Agreement was a success in many ways, it’s very clear that it will not deliver what is needed to achieve reductions sufficient to avoid a climate crisis. The latest analysis of government commitments by Climate Action Tracker estimates the current pledges would result in about 2.85˚C of global temperature rise. There is hope, however, in the next commitment period that pledges will increase, as the world wakes up to the disastrous impacts of our current level of warming. So for the purposes of an optimistic “reference case” scenario, One Earth uses the midline between current pledges and what is needed to achieve 1.5˚C:

It’s clear that all 3 pillars of action are required to achieve the goal of limiting warming below 1.5˚C. A transition to 100% renewables by 2050, while incredibly aggressive, is not sufficient to get to a low (50%) likelihood of the target, much less a strong (67%) likelihood. Environmental conservation, which avoids approximately 100 GtCO2 of emissions from land use change relative to the reference case, plus 275 GtCO2 in negative emissions from environmental restoration gets us very close to the goal, but it takes an additional 25 GtCO2 in negative emissions from the agriculture sector to actually get to a strong likelihood of staying below 1.5˚C.

Learn more by reading about the 3 pillars of action derived from the One Earth climate model -- 100% Renewable Energy, Nature Conservation, and Regenerative Agriculture.