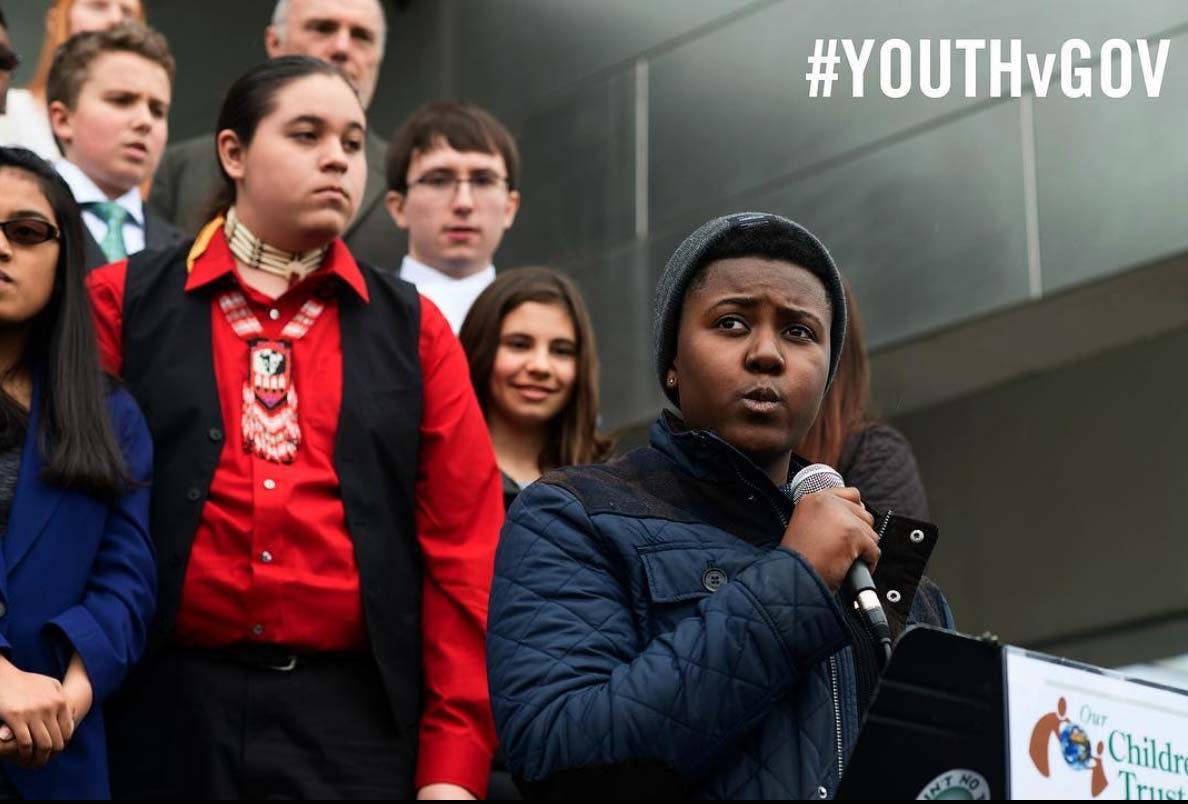 Twenty one kids are suing the U.S. federal government over climate change

Scientists believe that for the planet to continue to safely support life, the level of carbon dioxide in the atmosphere should be kept as close to 350 parts per million as possible. We haven’t seen that level since the late 1980s - more than a decade before Victoria Barrett was born.

Barrett is one of 21 young Americans—between the ages of 10 and 21-- who are suing the Trump Administration to compel action on climate change in a lawsuit known as Juliana vs. the U.S. They claim that the government is violating their constitutional rights to life, liberty and property by supporting the use of fossil fuels, which contribute to climate change.

The case is controversial and legal experts have called it “precedent-setting” - because the constitution has never been applied to tackling the issue of climate change.

In this episode of terrestrial we explore how this case works and what motivates a teenager to step away from school and friends to wage a legal fight against the government.

Terrestrial is KUOW's new podcast on the environment. Each episode explores the choices we make in a world we have changed. Hear all the episodes and subscribe here, or join our Facebook group and talk this stuff out with fellow listeners.

Unlike previous lawsuits that have sought to force the federal government to regulate CO2 emissions based on benchmark environmental laws like the Clean Air Act, Juliana vs The US relies on the Constitution.

Victoria and her co-plaintiffs claim that the Trump administration is violating their rights under the U.S. Constitution’s Fifth Amendment, which says: “No person shall.. be deprived of life, liberty, or property, without due process of the law.” The lawyers working on the case for Our Children’s Trust, argue that the federal government put the lives of citizens at risk by doing things like allowing companies to mine coal and drill for oil on public lands—since burning those fossil fuels contributes to climate change.

As David Faigman, a pro bono advisor on the case and dean of UC Hastings Law School in San Francisco, explained it, we give the federal government power—we put our trust in them—so that they can protect us and the lands and waters we all share. Victoria’s lawyers will try to convince the court to require the federal government to commit to reducing CO2 levels in the atmosphere to 350PPM interest of protecting our shared future.

Jim Huffman, dean emeritus of the Lewis and Clark Law School, is not convinced. The problem of CO2 emissions is complex and global in nature, and it is difficult to argue in court that forcing one country to limit its emissions will lead to a decrease in the global concentration of CO2 in the atmosphere.

“Nobody really knows what policies will lead to [that decrease] What are those policies?” Huffman asks.

Huffman describes himself as a “rule of law” guy and he said the youth plaintiffs are asking the court to overstep its bounds “to create totally new rules that I don’t think they have power to create.”

But there are examples of courts wading into thorny policy questions. In a case known as Brown v Plata lawyers representing prisoners in the California penal system sued, claiming that overcrowding in prisons violated their constitutional rights. In that case, a court eventually set a firm statistical threshold for when such conditions violated the constitution. Prisons could not be more than 137.5% over capacity. By marking that clear line in the sand, Faigman says, the state of California was forced to take definitive action to meet the 137.5% target.

From high school to the United Nations General Assembly.

Some critics of the lawsuit argue that the legal questions at play are too sophisticated for the plaintiffs in Juliana v. United States to truly understand. They say that lawyers and liberal parents are effectively putting them up to this.

This isn’t the case for Victoria Barrett, however. Both of her parents have questioned her activism. Her mother is from Honduras and warned her of the risks of suing the federal government. Her father is conservative and skeptical about the severity of the threat of climate change.

“I think my dad is really smart. I just think that he’s wrong about this specific issue,” Victoria said.

Victoria has had to straddle two worlds: high school - with friends and homework and college on the horizon - and teenage activism.

Last year, Victoria was really looking forward to her high school junior retreat, but she missed a big part of it because she was giving a talk about the lawsuit at the United Nations. As with much of her activism around the lawsuit and the larger issue of climate change, it’s been a draining, but inspirational experience for Victoria.

“I don’t want to have to do this. It’s just I feel like it obviously needs to be done… It’s frustrating to think about the fact that sometimes I feel like people my age are fighting the hardest when really, like, we didn’t even start this in the first place.”

This fall, Victoria will be heading to University of Wisconsin Madison. She plans to study political and environmental science.

The Trump Administration has petitioned to have the case dismissed and a ruling on that is expected any day now.

If you like this story, check out more episodes of the terrestrial podcast and subscribe here. Our next episode will be released on October 24th but in the meantime you can join our facebook group and share your thoughts on this story.