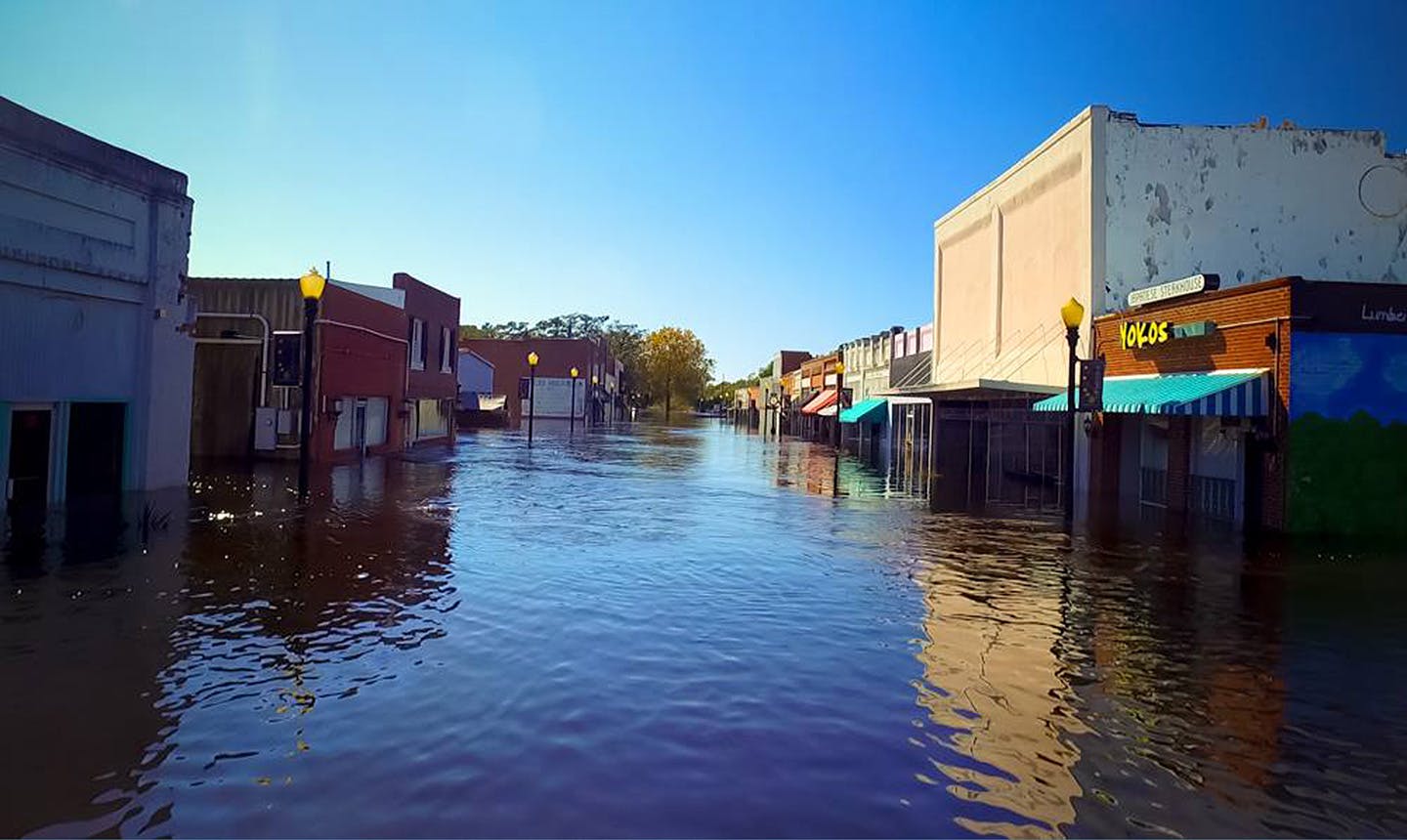 The town of Fair Bluff, North Carolina just after a prolonged rainfall. Photo by Jody Johnson, 2016
Share this post

Hollywood loves to make disaster movies. Usually they center around one cataclysmic event – an earthquake, an asteroid, a tsunami. Now imagine a disaster movie with 10 different types of cataclysms happening at the same time. According to the latest science, that seems to be the movie script we are now writing. We still have time to prevent the worst impacts of climate change, but if we aren’t able to pressure our governments to start taking bold action, we could see 4°C of global temperature rise in the future. By the middle of the century this could unleash a series of catastrophic impacts on our planet, threatening life as we know it.

The term global “warming” has a vaguely pleasant ring to it. But unless you live in Greenland, the rise in global temperatures is not a good thing, and in some regions will have disastrous consequences. Since 1950 the number of heat waves worldwide has increased, and heat waves have become longer with the hottest days becoming hotter and more frequent. In the past decade, the global area hit by extremely hot temperatures has increased 50 times (PDF). People living in cities are impacted the most, due to the urban ‘heat island’ effect which, according to a study of 60 U.S. cities, intensifies single-day high temperatures by an average of 17.5°F, compared to adjacent rural areas. Heat is the No.1 weather-related killer, and the hottest days, particularly days over 90°F, are associated with dangerous ozone pollution levels that can trigger asthma attacks, heart attacks, and other serious health impacts. Read More »

If you suffer from allergies or asthma, climate change is not your friend, but higher pollen counts are just one of a myriad of climate impacts on human health. As temperatures increase, rainfall patterns are changing while summers are becoming longer. This combination is giving insects a longer season for breeding across a wider area, greatly increasing the risk for the public. Mosquitoes capable of carrying and transmitting diseases like West Nile Virus or Dengue Fever were once non-existent in the U.S. but can now be found in more than half the country. A recent study links increasing heat and precipitation as a driver in more than 12 diseases. Another factor is the susceptibility to flooding, which can prevent cities like New York from properly treating sewage, which creates a ripple effect further amplifying the spread of disease in densely populated areas. Read More »

Rising temperatures mean increased evaporation of local groundwater supplies and decreasing glaciers. Glaciers provide fresh water for 1.2 billion people, but rising temperatures are causing nearly all of the world’s 60,000 glaciers to retreat. Within the next 40 years 1/4 of those glaciers will be gone, and by 2030 nearly half of the world’s population will be living in regions with water stress. In addition to greatly reducing water access and water quality for billions of people, this trend will increase the likelihood of prolonged drought in arid regions that rely on glacial melt and snowpack for the irrigation of crops. Very dry areas around the world have already doubled since the 1970’s and new reports project that 1/3 of our land could dry out by the end of the century. The recent drought conditions in China, Australia, Russia, and the U.S. have greatly reduced agricultural productivity, driving food prices higher and higher around the globe. According to a UN study, the U.S. which produces 1/4 of the world’s grain supply, could see as much as a 50% loss in crop productivity by 2080 (PDF). Food shortages will continue to disproportionately impact people living at or below the poverty level, driving further poverty and conflict. Read More »

Wildfires are a natural part of forest environments, but recent drought conditions in regions like California and Australia show that rising temperatures create the conditions for bigger, hotter wildfires in four major ways— longer fire seasons, drier conditions, more fuel, and more lightning strikes. In the western U.S. for example, snowmelt is now occurring as much as 4 weeks earlier than in 1950, which means the fire season lasts a month longer. Drier conditions and more dead wood, resulting from climate-driven infestations like pine beetle, mean that when lightning strikes it spreads faster and wider. A new report (PDF) indicates that in the U.S. the area of acres burned could as much as double by 2050. Globally, damages due to fire could rise to as much as $300B. Read More »

While natural variability continues to play a key role in extreme weather, climate change has shifted the odds, making certain types of extreme weather much more frequent and more intense. And it’s not just scientists who are reporting these findings. The reinsurance company Munich RE shows a tripling of weather and flood catastrophes since 1980. In the U.S. alone there have been 170 major weather events with damages above $1 billion since 1980, totaling approximately $1 trillion in damages (adjusted for 2013 dollars). New evidence suggests climate change may also be increasing the intensity of tornadoes in areas like the Midwestern U.S. In some regions like the Philippines, superstorms can cause devastating loss of life. Super Typhoon Haiyan, recognized as the strongest tropical cyclone to make landfall in world history, resulted in as many as 10,000 deaths. Read More »

Sea levels have already risen approximately 6” (15 cm) since the 1800’s, with most of this change occurring since the mid-20th century. The latest consensus from AR5 is that sea levels could rise 0.5 meters (18”) even with aggressive measures to curtail global warming gases. If action isn’t taken by governments to address carbon pollution, 1 meter or more of sea level rise is possible (more than 3 feet). Other studies factoring in the potential for cataclysmic events such as the meltdown of the Greenland ice sheet indicate double those levels or more. This would have enormous impacts for more than one billion people living in low-lying coastal areas, particularly in Asia where 200 million people could be forced from their homes. In Europe an estimated 13 million people will be affected and in the U.S. entire states could be subdivided by water. As seawater reaches farther inland, it can cause destructive erosion, flooding of wetlands, contamination of aquifers and agricultural soils, and lost habitat for fish, birds, and plants. And higher sea levels mean bigger, more powerful storm surges that can strip away everything in their path, creating further impacts. Read More »

For the more than 3 billion people worldwide living in poverty, the combination of impacts will have devastating impacts – destroying homes, reducing food security, and increasing health and mortality risks. This will result in enormous mass migrations of people and intense competition for resources, driving global conflict. In the 2014 U.S. Department of Defense Quadrennial Defense Review (QDR), the threat of climate change is declared as a very serious national security vulnerability that, among other things, could enable further terrorist activity. As U.S. Secretary of State John Kerry bluntly put it, “Tribes are killing each other over water today… Think of what happens if you have massive dislocation, or the drying up of the waters of the Nile, or the major rivers in China and India. The intelligence community takes it seriously.” An earlier 2007 Pentagon study (PDF) under President George Bush described climate change as a “threat multiplier” but the latest study makes a direct linkage between the impacts of global warming and international terrorism. Another study which synthesizes over 60 research papers, makes a direct linkage between rising temperatures and increased violence. Read more »

It goes without saying that climate change is not only bad for people, it has massive economic repercussions for both the public and private sectors. In just a single year (2011) the U.S. government spent $55 billion on a record 14 weather disasters. A recent study entitled Risky Business tallies devastating losses in the U.S. from a combination of property damages, lower productivity and reduced consumer spending. Climate change poses extreme threats to the stability of both local and national economies. In the business community the risks from climate change are beginning to be taken seriously, but a recent study by accounting giant PricewaterhouseCoopers (PwC) shows countries are falling far short of what is needed to maintain economic stability as climate risk increases. Dr Celine Herweijero of PwC calls climate change “the mother of all risks” for businesses, threatening in particular global supply chains. A related UK study indicates 9 major categories of risk (pictured below), impacting the supply and demand of everything from food to electronics. Energy companies in particular are at risk as they continue to secure assets like coal and oil deposits, which they may be forced to leave in the ground. Read More »

Climate change is expected to greatly reduce the natural habitat for more than 1/3 of all animal species and 1/2 of all plant species on land by 2050, threatening as much as 25% of all terrestrial species with extinction by the end of the century. Species in the oceans and in fresh water are also at great risk from climate change, especially those that live in ecosystems like coral reefs that are highly sensitive to warming temperatures. The largest numbers of plants and animals will likely be lost in sub-Saharan Africa, Central America, Amazonia and Australia. Major losses of plant species are predicted for North Africa, Central Asia and south-eastern Europe. Two new studies also indicate that bird populations are declining now and will be greatly impacted by climate change in the future, with more than half of all bird species, including the iconic American bald eagle, struggling for survival. Read More »

It’s hard to imagine a world without bald eagles, tigers, or indri lemurs (pictured above), but many people don’t realize just how vital these beautiful creatures are to the complex web of life. The flora and fauna that keep marine and wildland ecosystems healthy, are enormously productive contributors to our global economy. Recent studies have estimated that these ecosystems provide us with over $100 trillion in services every year, most of which we take for granted — like pollination of crops, purification of water, and production of medicinal compounds. Without a healthy, thriving natural world it is safe to say the entire global economy would collapse. Yet we are slowly, inexorably destroying the foundation for life on our planet. One new study suggests that 2/3 of the Earth's land (44% as intact natural ecosystems and 22% as agro-ecological buffers) must be protected to sustain the biosphere. Otherwise an ecosystem collapse could occur much sooner than thought. Read More »