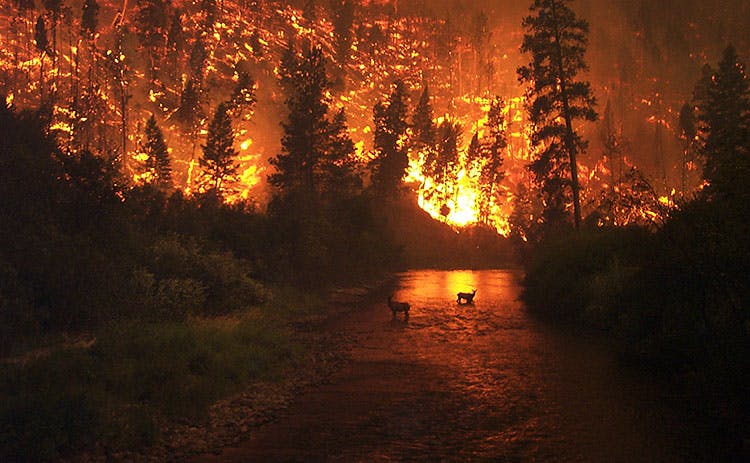 Avoided impacts by limiting warming to 1.5North America has already experienced a change in climate and an increased occurrences of extreme weather events. In particular, the frequency of heatwaves and extreme precipitation events has risen, and the amount of water stored in spring snowpack has declined. These trends are expected to continue in the coming decades, although at different paces in different regions, based on findings from the Intergovernmental Panel on Climate Change Climate change AR5, WGII.

Especially the western United States will experience severe drying over the course of the century, likely entering previously unchartered territory of drought extremes. Such a drying trend will pose substantial challenges for adaptation, especially in regions where human water use already exceeds available water resources.

Increasing risk to forests and settlements

Damages due to wildfires are set to multiply as the climate in North America becomes warmer and drier. The last decades have already seen a significant increase in larger wildfires across the western United States, which has been linked to the observed changes in climate. Consequences of wildfires include fragmented vulnerable ecosystems, damaged houses and more fire-induced deaths and diseases. While the risk of wildfires is already significant, it will become very high for a global temperatures increase of over 2°C and the potential to reduce these risk through adaptation measures will be limited. Increasing temperatures have also been found to increase risks from lightning: each degree of additional warming increases the frequency of lightning by about 12% over the continental US, further increasing the risks for fires under dry conditions.

Forests are also vulnerable to insect-outbreaks, the risk of which increases under warming temperatures; for example, mountain pine beetle outbreaks have severely affected more that 18 million hectares in British Columbia since 1974, and are moving northwards. This could have serious implications for the North American economy.

The agricultural sector in the region is projected to suffer declines in productivity as a consequence of decreases in water supplies for irrigation, and a decline in the yields of major crops due to reduced rainfall and greater climate variability. This would have serious implications for global food security as North America is a major grain exporter.

Human health is at risk from climate extremes

A growing body of evidence shows that human health in North America will be adversely affected by a number of climate-induced impacts. While the connections between climate change and health are complex and never mono-causal, linkages between storms, floods, heat waves and cold events and health have been demonstrated. An increase in heat-related mortality rates is expected in the USA as extreme events become more common. Adaptation will be essential for reducing the number of climate-related deaths.

Urban areas will be affected by sea-level rise and flooding

As sea levels rise and the frequency of cyclones and extreme precipitation events increase, flooding in urban areas along coasts and rivers will become more common. This will lead to damage to and disruption of infrastructure, supply chains and ecosystems, as well as adverse impacts on public health and water quality. Urbanisation and a lack of adequate flood management infrastructure will compound these damages. Estimates suggest that damages from river floods alone could reach up to US$19 per year by 2100.

Avoided impacts by limiting warming to 1.5

Severe impacts increase with higher levels of warming and limiting global warming to 1.5°C significantly reduces passing tipping points, which may lead to abrupt changes and severe impacts [4]. Lower levels of warming reduce the regional risks and the pressure of societies to adapt. The length of heat waves across North America, for example, is reduced by about 40% compared to a warming of 2°C.