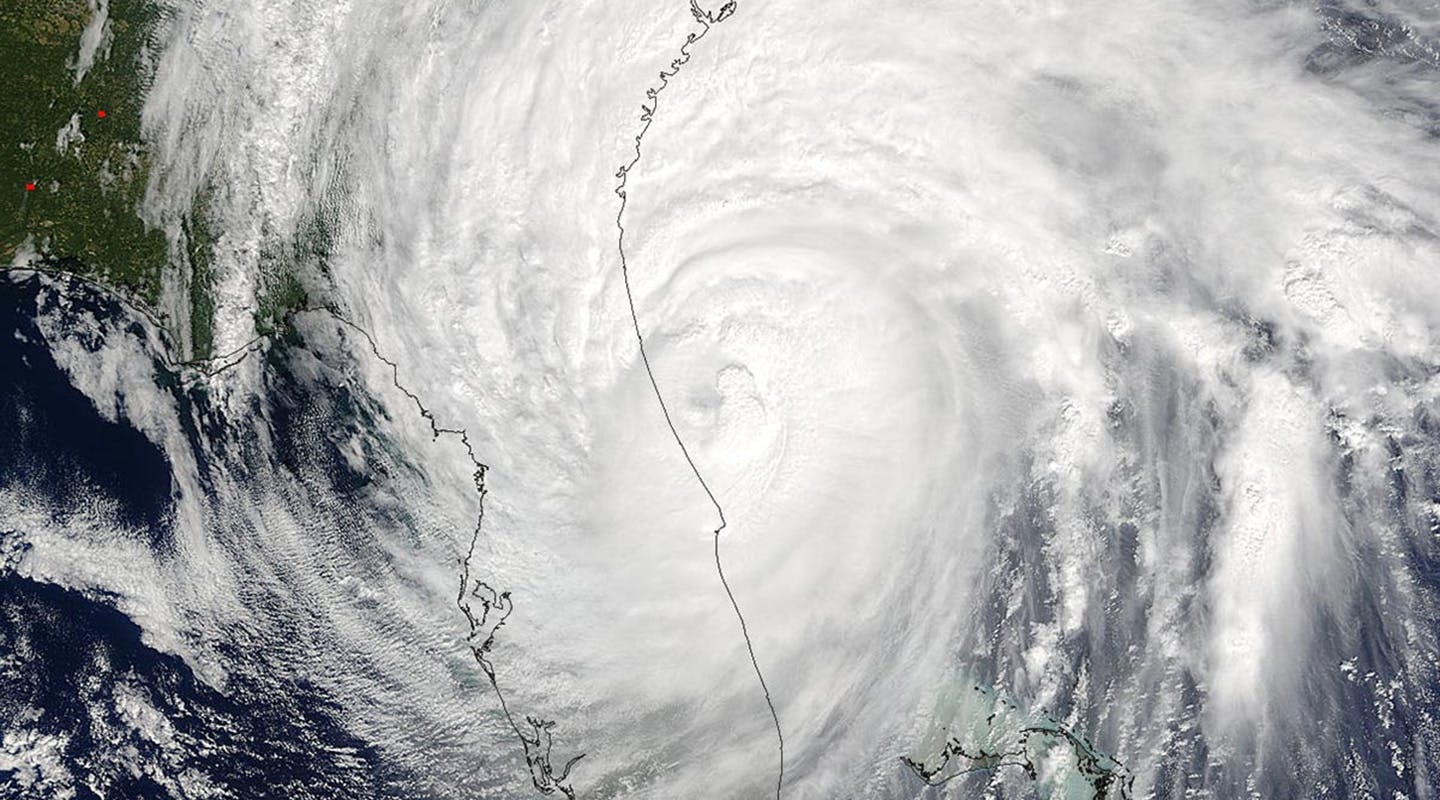 On October 4, 2016 Hurricane Matthew delivered a devastating punch to Haiti, striking the defenseless nation as a Category 4 storm with 145 mph winds—their third strongest hurricane ever recorded. Several days before reaching Haiti, Matthew put on a phenomenal display of rapid intensification, surging from a tropical storm with 70 mph winds to a Category 5 monster with 160 mph winds in just 36 hours. In just 24 hours, Matthew’s peak winds increased by 80 mph in the Atlantic. Matthew maintained Category 4 or 5-hurricane strength for 102 hours in October—the longest such stretch for an October Atlantic hurricane. Unfortunately, Matthew’s extreme behavior is something we are likely to see much more of in the coming decades due to climate change, since hurricanes are heat engines that extract heat energy from the oceans to power themselves.

During the period 1986 - 2010, the average time needed for an Atlantic hurricane to intensify from a minimal Category 1 hurricane with 74 mph winds to a high-end Category 3 hurricane with 129 mph winds fell by nearly 20 hours, from 60 hours to 40 hours. Higher sea surface temperatures (SSTs) have been found to promote higher rates of intensification of Atlantic hurricanes: during the period 1986–2013, the average hurricane intensification rate increased by 16% for a 1.8 deg F increase in SST.

The intensity, frequency, and duration of North Atlantic hurricanes, as well as the frequency of the strongest (Category 4 and 5) hurricanes, have all increased since the early 1980s. The relative contributions of human and natural causes to these increases are still uncertain. “Hurricane-associated storm intensity and rainfall rates are projected to increase as the climate continues to warm,” concluded the blockbuster 1,000+ page U.S. National Climate Assessment in 2014. The report, issued once every four years, is an effort by more than 300 U.S. scientists to assess how the climate is changing in the U.S., and is supervised and approved by a 60-member committee representing a cross section of American society, including representatives of two oil companies. Making more definitive statements on how much human-caused global warming might be responsible for the observed changes in hurricanes is difficult, since the database we have on historical hurricanes does not extend far enough into the past and is not of high enough quality.

Hurricane scientists are confident that the very strongest storms will get stronger by the end of the century, when Earth’s land and ocean temperatures are expected to warm 2 - 3°C. Computer modeling work consistently indicates that greenhouse warming will cause the globally averaged intensity of tropical cyclones to shift towards stronger storms, with intensity increases of 2 - 11% by 2100. But hurricanes are fussy creations, and are sensitive to wind shear and dry air. Although the strongest storms should get stronger when “perfect storm” conditions are present, these “perfect storm” conditions may become less frequent in the future, due to the presence of higher wind shear, altered atmospheric circulation patterns, or more dry air at mid levels of the atmosphere. The models used to formulate the 2013 IPCC report left open the possibility that we might see either a decrease or an increase in the total number of hurricanes, but emphasized that the strongest storms should get stronger.

The behavior of these strongest hurricanes is critical, since they do most of the damage we observe. Over the past century, Category 3 - 5 hurricanes did 85% of US hurricane damage, despite representing only 24% of U.S. landfalling storms. Global sea level rise over the past decade has been about double what it was in the 20th century, and the rate of sea level rise is expected to accelerate. Storm surge does the majority of damage in major hurricanes, and storm surges riding on top of higher sea levels are going to do a lot more damage in the coming decades. We can also add onto that the increase in hurricane rainfall of 20% expected by 2100, which will sharply increase damages due to fresh water river flooding.