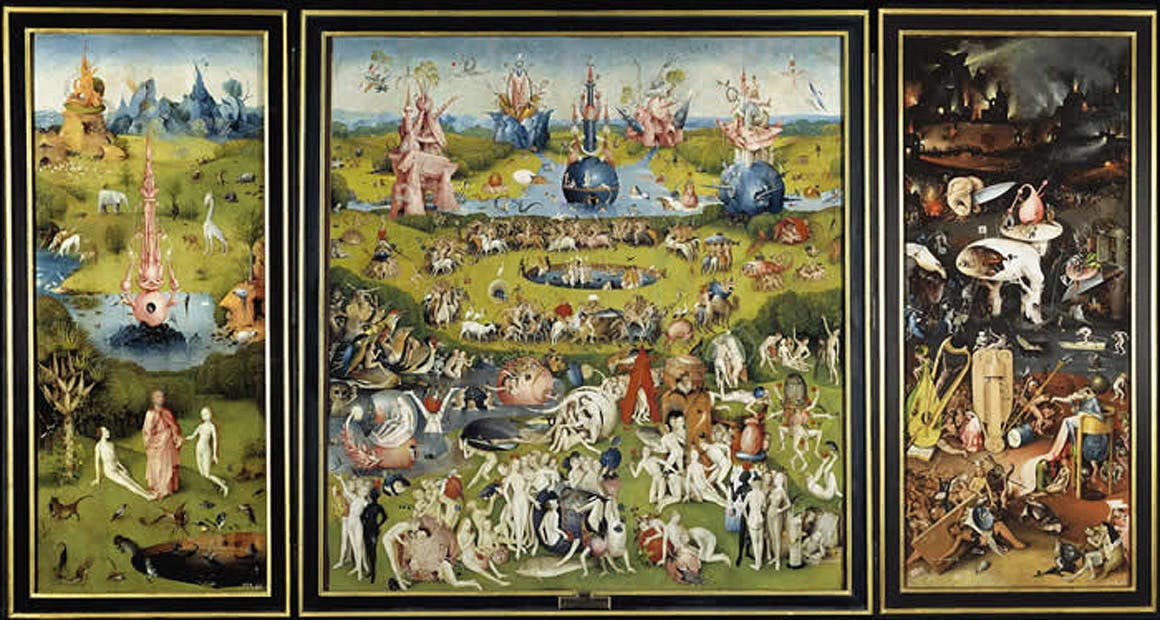 The Garden of Earthly Delights

The Garden of Earthly Delights is considered one of art history’s most enigmatic paintings. Made by the Netherlandish master Hieronymous Bosch around 1500 AD, it was painted during the Renaissance, a time of rediscovering and furthering the ancient arts and sciences of the classical era. At the time of its painting, it was treated as a theatrical “play”, with well known symbols and codic moments telling a clear moral message widely understood by the populace.

The triptych painting is on three oak panels that are hinged and was made with oil paint. Epic in scope and scale, it measures around 12 x 17 feet, and was created from devoted years of work. The painting is one of the great masterpieces of the Northern Renaissance and is currently located at the Prado Museum in Madrid. Like religious altarpieces of the time, it was a functional object. The priests would open and close the hinged panels during ritual. The two outer sections fold over and close the painting, with a single globe painted upon its outmost surface. The globe is a grisaille (a painting in grey) showing the earth in the midst of the biblical narrative of Creation. The Erdapfel, one of the first map globes, was created in 1493 AD, around the time Bosch began painting the Garden. At this time the idea of a spherical globe was new; Magellan had yet to complete his 1520 AD journey around the world.

To consider the impact of this painting, think of a three-part play. The scene unfolds within an enormous glass sphere with the Earth floating inside. It is important to note this is one of the first (if not the first) depictions of the Earth as a sphere sitting in space. Bosch rendered it as a delicate space, like a snow globe, depicting the 3rd day of creation (God is floating in the top left corner whispering the words of creation). The concept of “atmosphere” had yet to be created, but here Bosch presages the idea by showing stormy clouds contained within the sphere. The following is a description of the three panels and the three acts:

“Act I” is located in the left panel depicting Genesis, and the panel contains the various stages of creation. On what would be the 5th day of creation, God creates the animals who roam free. Centrally located, in a powerful and womb-like manner is a wild pool of water with creatures emerging from it as Genesis describes. At the bottom of the panel we have the 6th day wherein God decides to channel his creative power into making humankind. God creates Adam and Eve.

“Act II” is located in the large, center panel. Beginning from the top, the viewer sees animals and humans happily coexisting – the”peaceable kingdom.” An uprising happens in the middle of the panel at which point the narrative turns. Men drive the animals around in a circle as beasts of burden. It is a crowded and orgiastic life, a time of jolly excess, a state of great human freedom and consumption. Humans take creation into their own hands and turn away from the natural order. People are consuming the abundance given to them with abandon, completely impoverishing the planet. Our own insatiable demand for more leads us to blindly damage our own lives and our planet, “The Garden of Earthly Delights.” Panel 2 is described in a dangerous tone by American writer Peter S. Beagle as “a place filled with the intoxicating air of perfect liberty.”

In “Act III” we see the consequences of man’s activities. At the top, a black zone signals that man has transformed the paradise into a dark and burning hell. In the center, the body of water is now frozen over. There is no escape, no light, no back door. Hedonistic excess, damnation and desire is fueling its own actions. This manifests in a freakish depiction of a hellscape. Everything is at odds with nature, and human’s loose the paradise they enjoyed. Bosch goes out of his way to show that even religious figures are now doing evil things.

This painting’s narrative is a moral warning. A prominent theory is that the painting connects with the time just before the narrative of a great flood, which more or less wiped out humanity because of its sinful ways, most notably gluttony. This inspired the name of the film “Before the Flood” – we are enacting the fall from grace that Bosch depicts. In an insatiable desire to consume more we are literally turning our Earth into a hellish landscape.

In my experience working from the painting, this work is a great achievement in both storytelling and painting. Art historians often decode the painting as a clear premonition of the risks of temptation and the misuse of nature and of earth’s bounty. The thin glazes of color create the possibility of time and belief to co-exist in an earthly form that respects and complements Godly ones. To repaint or replicate the painting is impossible, without the great tome of belief and natural reverence that was, and is, Bosch.